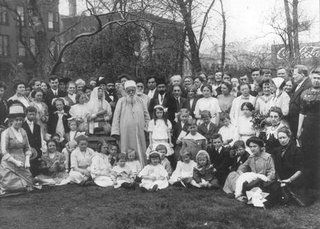 ‘Abdu’l-Bahá’s interest in women’s work and progress is well known, and among the notable leaders who came to see him, may be mentioned Mrs. Annie Besant, President of the Theosophical Society, the organizers of various suffrage bodies, civic and philanthropic workers, the principals of several woman’s colleges and lady doctors.
A spirited conversation due to the visit of an ardent suffragist will be long remembered by those who had the privilege of being present. The room was full of men and women, many Persians being seated in their familiar respectful attitude on the floor.
After contrasting the general position of the Eastern and the Western women, and then describing how in many respects the Eastern woman has the advantage of her Western sister, ‘Abdu’l-Bahá turned and said to the visitor: “Give me your reasons for believing that woman today should have the vote?”
Answer: “I believe that humanity is a divine humanity and that it must rise higher and higher; but it cannot soar with only one wing.” ‘Abdu’l-Bahá expressed his pleasure at this answer, and smiling, replied: “But what will you do if one wing is stronger than the other?” Answer: “Then we must strengthen the weaker wing, otherwise the flight will always be hampered.”
‘Abdu’l-Bahá smiled and asked: “What will you say if I prove to you that the woman is the stronger wing?”
The answer came in the same bright vein: “You will earn my eternal gratitude!” at which all the company made merry.
‘Abdu’l-Bahá then continued more seriously: “The woman is indeed of the greater importance to the race. She has the greater burden and the greater work. Look at the vegetable and the animal worlds. The palm which carries the fruit is the tree most prized by the date grower. The Arab knows that for a long journey the mare has the longest wind. For her greater strength and fierceness, the lioness is more feared by the hunter than the lion. “The mere size of the brain has been proved to be no measure of superiority. The woman has greater moral courage than the man; she has also special gifts which enable her to govern in moments of danger and crisis. If necessary she can become a warrior.”
Posted by Papijoon at 11:58 PM