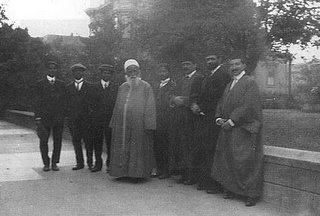 The gentleman then put a question which he said he considered of very great importance in connection with a religious movement, claiming to be universal. What position he asked, if any, did Bahá’u’lláh given to the modern ideas and conceptions of Science in his teachings. The whole structure of modern civilization is based upon the results and the knowledge obtained through laborious and patient observation of facts collected by men of Science: in some cases through hundreds of years of painstaking investigation. To make his meaning clearer, he instanced the ethic, and the moral teachings of the Chinese philosophers, than which he could conceive nothing higher. However, these teachings had very little effect outside of China, for the reason he considered, that they were not primarily based on the teachings of Science.
‘Abdu’l-Bahá replied that a very great importance was given to Science and knowledge in the writings of Bahá’u’lláh, who wrote that, if a man educated the children of the poor, who could not themselves afford to do so, it was, in the sight of God, as if he had educated the Son of God.
If any religion rejected Science and knowledge, that religion was false. Science and Religion should go forward together; indeed, they should be like two fingers of one hand.
Bahá’u’lláh had also in His writings given a most important place to Art, and the practice of skilled trades. He had stated that the practice of an Art or Trade in the true spirit of service was identical with the worship of God.
A gentleman connected with the work of a Settlement then asked what was the best method of raising up and civilizing the very lowest and most degraded and ignorant of the people and would their education come about gradually through the enlightenment of the Spirit, or was there any special means we could adopt to further this end? ‘Abdu’l-Bahá replied that the best way was to give them spiritual teachings and enlightenment. He also remarked that the way to broaden the outlook of the very narrow-hearted and prejudiced, and to make them listen to a wider teaching, was by showing towards them the greatest kindness and love. The example of our lives was of more value than words.
Posted by Papijoon at 6:19 AM