Some Personal Characteristics of ABDU'L-BAHA 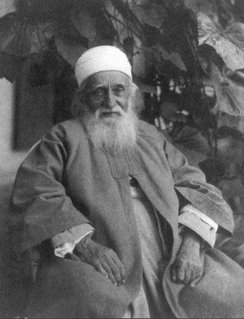 There is a note in ‘Abdu’l-Bahá’s character that has not been emphasized, and with which no idea of him is complete. The impressive dignity which distinguishes his presence and bearing is occasionally lighted by a delicate and tactful humour, which is as unaffected as it is infectious and delightful.
On his last afternoon in London, a reporter called to ask him of his future plans, finding him surrounded by a number of friends who had called to bid him good-bye. When, in answer to this query, ‘Abdu’l-Bahá told in perfect English of his intention to visit Paris and go from there to Alexandria, the press representative evinced surprise at his faultless pronunciation. Thereupon ‘Abdu’l-Bahá proceeded to march with a free stride up and down the flower-scented drawing room, his Oriental garb contrasting strangely with his modern surroundings; and, to the amusement of the assembly, uttered a string of elaborate English words, laughingly ending, “Very difficult English words I speak!” Then, a moment later, with the swift transition of one who knows both how to be grave and gay, he showed himself terribly in earnest.
He had left orders that none were to be turned away, but one who had twice vainly sought his presence, and was, through some oversight, prevented from seeing him, wrote a heartbreaking letter showing that he thought himself rebuffed. It was translated by the Persian interpreter. ‘Abdu’l-Bahá at once put on his coat, and, turning towards the door, said, with an expression of unspeakable sadness, “A friend of mine has been martyred, and I am very grieved. I go out alone.” and he swept down the steps. One could then see how well the title of “Master” became him.
Another phase of his character which none who saw him could ever forget was his attitude towards children who were brought to him. Many of his talks were given as he sat with his arm encircling one of them.
He invariably admonished the parents thus: “Give this child a good education; make every effort that it may have the best you can afford, so that it may be enabled to enjoy the advantage of this glorious age. Do all you can to encourage spirituality in them.” One who sought the presence of ‘Abdu’l-Bahá realized the father-like sympathy which is his. Speaking of his and others’ love for ‘Abdu’l-Bahá the reply was: “I know that you love me, I can see that it is so. I will pray for you that you may be firm and serve in the Cause, becoming a true servant to Bahá’u’lláh. Though I go away I will always be present with you all.” These words were spoken with the greatest loving sympathy and understanding of difficulties; during the moments of this little talk ‘Abdu’l-Bahá held and stroked the speaker’s hands, and at the end took his head and with a gentle touch drew it to him kissing the forehead of the young man, who felt that he had found a father and a friend.
Posted by Papijoon at 12:39 AM

see
www.bahai.org
for more info of the Bahai Faith