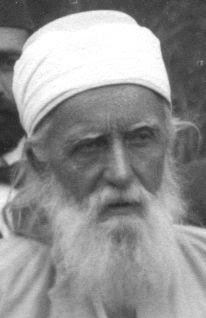 When asked if it would be always necessary for prophets to come from time to time—“would not the world in the course of events through progress reach to a full realization of God?”—‘Abdu’l-Bahá replied: “Mankind needs a universal motive power to quicken it. The inspired messenger who is directly assisted by the power of God brings about universal results. Bahá’u’lláh rose as a light in Persia and now that light is going out to the whole world.”
“Is this what is meant by the Second Coming of Christ?” “Christ is an Expression of the Divine Reality, the Single Essence and Heavenly Entity, which hath no beginning or ending. It has appearance, arising, and manifestation and setting in each one of the Cycles.”
Those who have been with ‘Abdu’l-Bahá notice how, often, after speaking earnestly with people, he will suddenly turn and walk away to be alone. At such times no one follows him. On this occasion, when he finished speaking and went out through the orchard gate into the village, all were struck with his free and wonderful walk which has been described by one of our American friends as that of a shepherd or a king.
As he passed along the ragged children clustered about him by dozens, the boys saluting him as they had been taught in school, showing how instinctively they felt the greatness of his presence. Most noticeable was the silence of even the roughest men when ‘Abdu’l-Bahá appeared. One poor tramp exclaimed “He is a good man,” and added, “Ay, he’s suffered!”
He took particular interest in the sick, crippled and poorly nourished children. Mothers carrying their little ones followed him, and a friend explained that this great visitor had come over the seas from the Holy Land where Jesus was born.
All day long people of every condition gathered about the gate for a chance of seeing him, and more than sixty drove or cycled to Vanners to see him, many wishing to question him on some special subject. Among them were the clergy of several denominations, a head master of a boys’ public school, a member of Parliament, a doctor, a famous political writer, the vice-chancellor of a University, several journalists, a well known poet, and a magistrate from London.
He will long be remembered as he sat in the bow window in the afternoon sunshine, his arm round a very ragged but very happy little boy, who had come to ask ‘Abdu’l-Bahá for sixpence for his money box and for his invalid mother, whilst round him in the room were gathered men and women discussing Education, Socialism, the first Reform Bill, and the relation of submarines and wireless telegraphy to the new era on which man is entering.
During the evening a young betrothed couple in the village, who had read some of the Bahá’í books, begged permission to come to him. They entered shyly, the man, led by the girl. ‘Abdu’l-Bahá rose to greet them, and made them take a place in the circle. He talked earnestly to them upon the sacredness of marriage, the beauty of a real union, and the importance of the little child and its education. Before they left he blessed them, and touched their hair and foreheads with a Persian perfume.
Posted by Papijoon at 7:49 AM