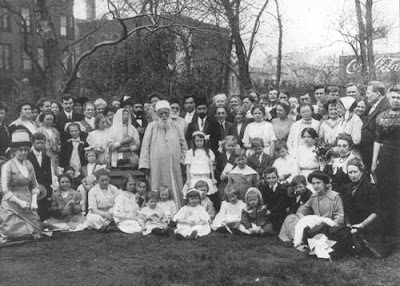 Farewell words of ‘Abdu’l-BaháO NOBLE friends and seekers for the Kingdom of God! About sixty years ago in the time when the fire of war was blazing among the nations of the world, and bloodshed was considered an honour to mankind; in a time when the carnage of thousands stained the earth; when children were rendered fatherless; when fathers were without sons and mothers were spent with weeping; when the darkness of inter-racial hatred and animosity seemed to envelope mankind and blot out the divine light; when the wafting of the holy breath of God seemed to be cut off—in that time Bahá’u’lláh rose like a shining star from the horizon of Persia, inspired with the message of Peace and of Brotherhood among men.
He brought the light of guidance to the world; He kindled the fire of love and revealed the great reality of the True Beloved. He sought to destroy the foundations of religious and racial prejudice and of political rivalry.
He likened the world of humanity to a tree, and all the nations to its branches and the people to its leaves, buds and fruits.
His mission was to change ignorant fanaticism into Universal love, to establish in the minds of His followers the basis of the unity of humanity and to bring about in practice the equality of mankind. He declared that all men were equal under the mercy and bounty of God.
Then was the door of the Kingdom set wide and the light of a new heaven on earth revealed unto seeing eyes.
Yet the whole Bahá’u’lláh’s life was spent in the midst of great trial and cruel tyranny. In Persia He was thrown into prison, put into chains, and lived constantly under the menace of the sword. He was scorned and scourged.
When He was about thirty years old He was exiled to Baghdád, and from Baghdád to Constantinople, and from there to Adrianople and lastly to the prison of Akká.
Yet under chains and from His cell He succeeded in spreading His cause, and uplifting the banner of the oneness of humanity.
Now, God be praised, we see the light of Love shining in the East and in the West; and the tent of fellowship is raised in the midst of all the peoples for the drawing together of all hearts and souls.
The call of the Kingdom has been sounded, and the annunciation of the world’s need for Universal Peace has enlightened the world’s conscience.
My hope is that through the zeal and ardour of the pure of heart, the darkness of hatred and difference will be entirely abolished, and the light of love and unity shall shine; this world shall become a new world; things material shall become the mirror of the divine; human hearts shall meet and embrace each other; the whole world become as a man’s native country and the different races be counted as one race.
Then disputes and differences will vanish, and the Divine Beloved be revealed on this earth.
As the East and the West are illumined by one sun, so all races, nations, and creeds shall be seen as the servants of the One God. The whole earth is one home, and all peoples, did they but know it, are bathed in the oneness of God’s mercy. God created all. He gives sustenance to all. He guides and trains all under the shadow of his bounty. We must follow the example God Himself gives us, and do away with all disputations and quarrels.
Praise be to God! the signs of friendship are appearing, and as a proof of this I, today, coming from the East, have met in this London of the West with extreme kindness, regard and love, and I am deeply thankful and happy. I shall never forget this time I am spending with you.
Forty years I endured in a Turkish prison. Then in 1908 the Young Turks “Committee of Union and Progress” shook the gates of despotism and set all prisoners free, myself among them. I pray that blessing may be upon all who work for Union and Progress.
In the future untrue reports will be spread regarding Bahá’u’lláh in order to hinder the spread of Truth. I tell you this, that you may be awake and prepared.
I leave you with prayer that all the beauty of the Kingdom may be yours. In deep regret at our separation, I bid you good-bye.
____________________
The translation of the valedictory having been read by Professor Sadler, ‘Abdu’l-Bahá closed the meeting by giving his blessing in undulating rhythmic tones.
By the time these lines appear ‘Abdu’l-Bahá Abbás will have left our shores, but the memory of his gracious personality is a permanent possession. His influence will be felt for many days to come, and has already done much to promote that union of East and West for which many have long yearned.
Posted by Papijoon at 7:40 AM